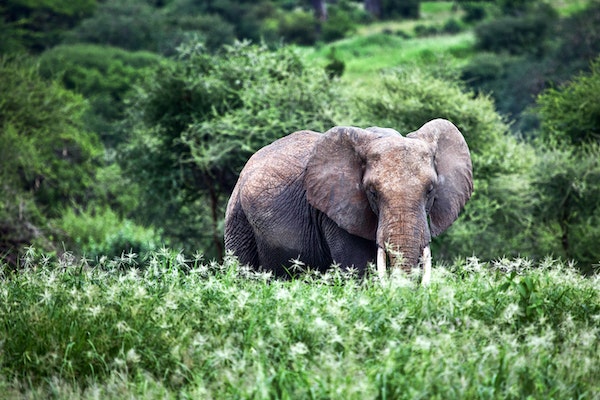 Tarangerie National Park is located n Tanzania, a little past the world famous Serengeti National Park. Tarangere is a lovely quiet park, most well-known for its elephant migration and birding. The majority of travellers to the region either miss out Tarangerie altogether, or venture into the park for a matter of hours - leaving swathes of Tarangerie virtually untouched.

Tarangerie has large areas of open grasslands, floodplains, many baobab trees and a large area of tall acacia woodland. It is beautifully unspoilt, and the wide views to distant, variously purple formations of volcanic mountain ranges along the drive are superb. The land is hilly and dominated by the impressive Tarangerie River, which attracts large numbers of migrant amimals during the dry months. Most animals tend to migrate out of the park at other times, other than the Lions, who don't tend to abandon their territories.

It was a reputation for elephant "pow-wow's", when different herds congregate in one area around the end of the rainy season, (the end of April). The dominant males take advantage of the situation to sow seeds for future generations. The following 22 month gestation period is timed to that the birth coincides with the beginning of the rainy season, two years later.

Some areas of Tarangerie do have a number of tsetse flies, and strong repellent is a must. The tsetse have stinging bite and are a pest. Fortunately, there does not tend to be any around the camps.

Tarangerie gives visitors some of the quietest game viewing environments of all the parks in the region. The south of the park is especially quiet, and there are a number of Lodges and camps from which to explore the park. Overall Tarangerie is a superb little park, and a seriously good option for getting away from it all.