Mount Kilimanjaro is located close to Arusha, and climbs leave from the nearby town of Moshi.

I can organise a climb for you either a private climb, with your own cook and guide, or with an existing group.

There are a number of routes which can be taken to reach the summit, the most popular of which is the Machame Route, closely followed by the Marangu Route. These two routes account for 95% of climbers.

Each route has a differing degree of difficulty, and the longer you are able to allow, the more likely you are to summit.

I generally suggest to allow one additional week if you intend to climb Mt. Kilimanjaro. 6 days for the climb and an additional day to rest afterwards.

It is generally considered that the best time of year to climb Kilimanjaro is June to October. January to March is also a good time, but the temperatures may be a little colder. 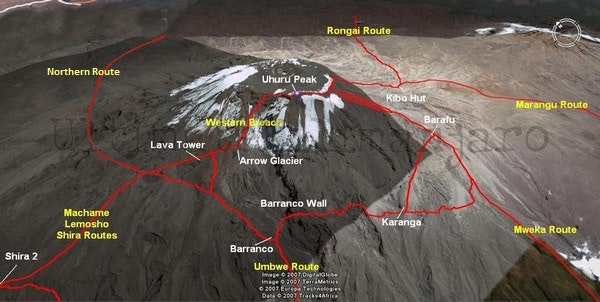